The OG, excessively long Build Log is o’er at LTT. This one here will be slightly condensed?

(With the operative word being “slightly.”

Names are important. A good name expresses the personality of its bearer well, and likewise, a good title-bearer should live up to its name. I built Trolley-PC in March 2020, but waited until the Fractal Design Define 7 Compact Upgrade in October 2020 before naming my PC, 'cos I couldn’t think of a suitable name for it.

Deep breath.
I chose a weeb name because I AM A WEEB AND I’M PROUD TO BE A WEEB.
Clears throat.

Installation list for Future ‘Chew to have a clear-cut order of things, especially if I need to reinstall Windows. Based off JayzTwoCents’s Guide and personal preferences. ¯_(ツ)_/¯

I fully realize that my build is far from balanced. For $1,500 (approximate total cost, minus the UPS + peripherals), I wager others could draw up a significantly more powerful system. But note that I’m no OC’er, and I have very minimal interest in “min-maxing” my build’s price-to-performance. It works perfectly well for my current use case – primarily gaming and [email protected]/BOINC – and I’ve yet to encounter any detrimental hardware issues I couldn’t troubleshoot.

Would also like to send many thanks in @Den’s direction – a very significant number of Hoshī’s PC parts and peripherals were gifted by him!

Hoshī + Upgrades!
PC’s actually been sitting with the side panel off since… April?

) back in early June.

Hoshī - Cable Management
Y’know when you put a lot of effort into a thing.
Only to tear it down later?
Yeah…

But, gotta deal with the rat’s nest to get at the HDD rack.

Hoshī - Underside
Props to Fractal Design for the rail design, much appreciated.
Lets me slide the HDD rack without fully removing its screws.
If say, I needed to get at the bottom slot (currently blocked), I give the rack a temporary slide to the right, and I can pull it out.

HDD Dampener
I only noticed the shape of this thing now.
Uh, eight months after building in the Define 7 Compact case.
And… I’m fairly certain I installed it wrong the first time around.

HDD Tray + HDD Dampeners
Dampeners in the same plane as the HDD tray.
Makes sense, as that way, they can make contact with both the vibrating HDD and the screws holding it to the tray.
'Chew is the biggest derp.

HDD + CableMod Cable Extension Installed
I actually started with the cable extension first.
Too busy muttering colorful words under my breath to take pics of it at the time.

Hoshī - Front Panel Removed
Like the rest of the Define 7 Compact, removal of the front panel is completely tool-less.
Just, yoink!

Hoshī - Noctua Fans Installed!
This took me waaay too much effort.

Ran into clearance issues between the top fans and the 4+4 pin EPS Cable Extension.
Also, please ignore the cable leading up to that fan in the front. Pls, TY.

Data Transfer - Media (D:) to Backup Plus (E:)
Before the hardware upgrades, I made a backup of the Media drive on my Seagate Backup Plus.
Partly 'cos I had something to restore, if I ran into issues moving all my games to the new HDD.
Also partly to get an idea how fast or how slowly data would transfer.
Ignore the Windows estimate, the copy-pasta took mebbe an hour, for 200 GB of stuff.

BIOS
HDDs detected? Check.
Fans running? Check.
(Yes, I plugged fans into the AIO and Water Pump headers. Cable lengths, yanno.)
Cable Extension, I’ll have to check over the next week. Hopefully power delivery will be stable and no BSODs.

4 TB HDD Automatically Detected!
Didn’t have to fanagle with Disk Management and pull up YouTube tutorials!
Den is to thank.

Data Transfer - Media (D:) to Local Disk (E:)
Hm… Don’t remember how long it took. I think I was cleaning up tools and leftover accessories after the hardware upgrade? Eh. ¯_(ツ)_/¯
After copy-pasta’ing my games over, went through the tedious part of “repairing” game clients and correcting game directories.

Steam is easy and painless, everything’s done automatically and in an instant.
Origin needs the user to find the game’s new folder, and can verifying files take a while, depending on how large the game is.
Ubisoft Connect is also easy and painless, seems to be automatic. Buuut I only have one Ubisoft game to test that with.

Actually did the physical fiddling around June 19. Spent the next two weeks watching out for any BSODs or funky PC issues.

UGH. Pleeeaaase, let me be safe.

Smol thankies to everyone that chimed in, in the Fractal Design Define 7 Compact - Airflow Question and the 4 TB SSD/HDD - Recommendations? threads!

4 TB storage space, I’m currently also satisfied with? Haven’t noticed any significant changes that affect gameplay or loading times, though keep in mind I was moving from one HDD to another HDD (low standards are low, haha), and I’ve barely grazed the surface of that chonky 4 TB capacity.

Learned that lesson during BSOD month.

Hoshī - Closed Up!
Define 7 Compact’s side panel makes it sooo painlessly easy to close up shop, even in compact spaces. There’s like, an 1.5 inches of space, between the UPS and the PC.
Don’t need a lotta horizontal space (X-Y Axis). Just a bit of headroom (Z Axis) to slide it in, and it closes up with a literal touch. No thumbscrews FTW!

Ah, the monitor mount’s slightly visible in the photo, but from where I’m sitting, the vertical monitor blocks it from view.

Finally got around to fixing the stupid angled gap between the monitors, with help from roommate!

…Solo’ing monitors and monitor mounts is a giant PITA. It’s easier with hotshoe (coldshoe?) VESA mounts, but I still do not recommend.

Inland Professional 240GB SATA SSD + SATA Cables
Got the SSD a while back, but hadn’t had the motivation to use it 'til now.
Also, about two days ago, I realized I didn’t have extra SATA data cables lying around.

Managed to mooch the SATA cables from the coworker I sold the GIGABYTE MOBO to. Bless.

Hoshī - Cable Management (After)
The freaking rat’s nest is growing.

…Just gonna slap the side panel on and forget about it.

Disk Management - New Volumes
Been a while since I last touched Disk Management, so I looked up Jayztwocent’s Post-Build Guide. Steps listed below for Future 'Chew’s reference, since she disdains watching video tutorials. 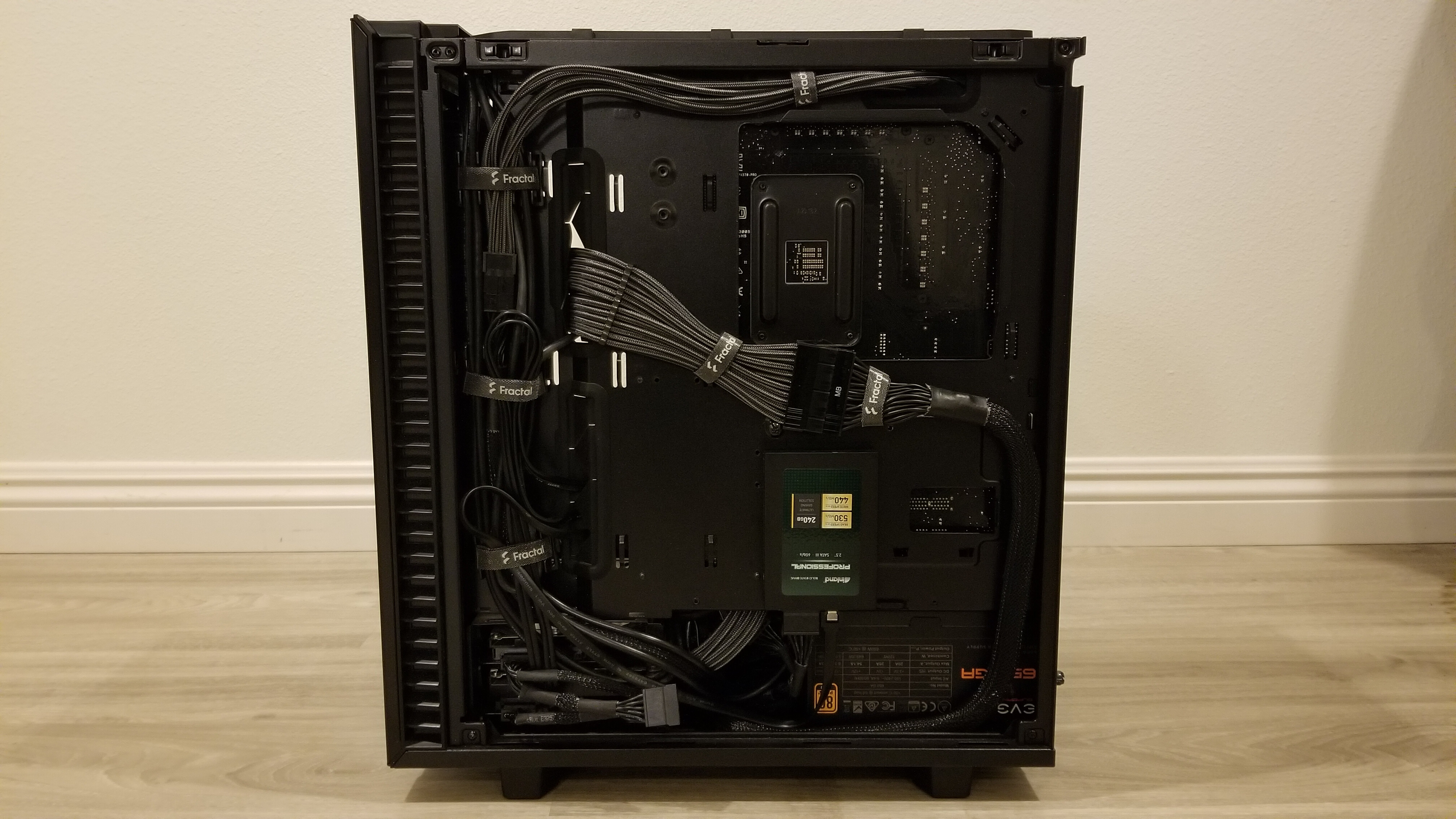 She called it a nest…
Man… if my cable nests looked this good.