Consoles! Some of us love them, some of us hate them, but I’ve always had an affinity for them - especially as I started to make some money. What do you have in your collection and what do you actively keep plugged into your TV (or capture card, if you’re me) so you can play as you wish?

This is my collection as it stands, barring an untested SNES and Sega Genesis (and CD).
Some points of interest here are a CECHG01 PlayStation 3 that needs fixing, a revision 1.6 Xbox and an SCPH-50001 PlayStation 2 modified with MechaPwn to run imported games on it.

This is that PS2 in question. And I oughta leave it at that before this turns into technobabble about how the GameCube’s Digital Out port is fully digital, or how the SCPH-39001 PlayStation 2 is the most reliable PS2 one can buy.

Since I’m moving, I can’t take pics of my collection right now. But I’ll update this with some pictures as soon as I get the chance!

But for now, here’s my collection as it stands:

I also have a Dreamcast coming in the mail right now (ordered it yesterday). I wish I could have bought one locally to avoid shipping and having to buy a console I can’t see in person, but these things are near impossible to find nearby, so I had to go with eBay. I’m very excited to finally add a Dreamcast to my collection though!

SCPH-50001, can’t go wrong with one of those, especially for modding purposes! If you ever wanna play imports on your PS2, I very strongly recommend checking out MechaPwn if you haven’t already.
Original Xbox, nice, nice. I paid $20 for mine about a year ago. I think the clock capacitor is bad, but it hasn’t leaked on me, so it’s whatever. It’s a 1.6 so it’d be a pain in the ass to actually replace it.
Xbox 360 Slim, the best revision of the Xbox 360, although I hear the Es are very reliable.
My family’s had a Wii for forever, but chances are high that I’ll steal it whenever I leave.
My parents have an NES that they haven’t touched in a couple of years now. They’ve been playing the hell out of their Nintendo 64, though, so that’s good enough lol.

I’ve always wanted a Dreamcast, but the problem is that, pretty much more than any other console, it gets expensive fast. VGA boxes, games, controllers and the like will always wind you down a rabbit hole of “how can I get the best out of my Dreamcast?”

Yeah, I’m definitely planning on modding my PS2 sometime. I’d love to get retroarch running on it to play some Genesis games, and being able to play games from other regions would be nice (specifically being able to play the PAL version of Sonic Gems collection so I don’t have to pay 5 times more for the Gamecube version). I just keep forgetting to buy another memory card to mod it with…

And yeah, the Dreamcast can be pretty expensive. I got really lucky and sniped a listing for $95 (+$25 shipping) that comes with two controllers, a VMU, SEGA Bass Fishing, and Web Browser 2.0 as well as the original AV cable, RF adapter, and an HDMI adapter. Not to mention the console and controllers don’t appear to have any yellowing. I’m definitely planning on getting some more games for it once my birthday rolls around in a bit over half a month, because I don’t know how long I can last just playing SEGA Bass Fishing before I get bored of it.

My console collection isn’t big by any means, nor do I use them a lot, but I have owned the PS Vita Slim since 2012, I got the limited edition at the time which included a copy of Borderlands 2, it was my first ever console and I enjoyed it a lot, admittedly not a lot of games ran well on it, Borderlands 2 for example ran like utter garbage but was tons of fun nevertheless.

Recently though, my brother told me that he stopped using this PS4 and that he doesn’t need it anymore and so he asked me if I wanted it, and so now I have both a PS Vita Slim and a PS4 White, I only use the PS4 from time to time, and it’s always a blast, I stopped using my Vita however and it’s now just sitting in my drawer collecting dust, I just don’t enjoy it anymore but have very fond memories of using it. 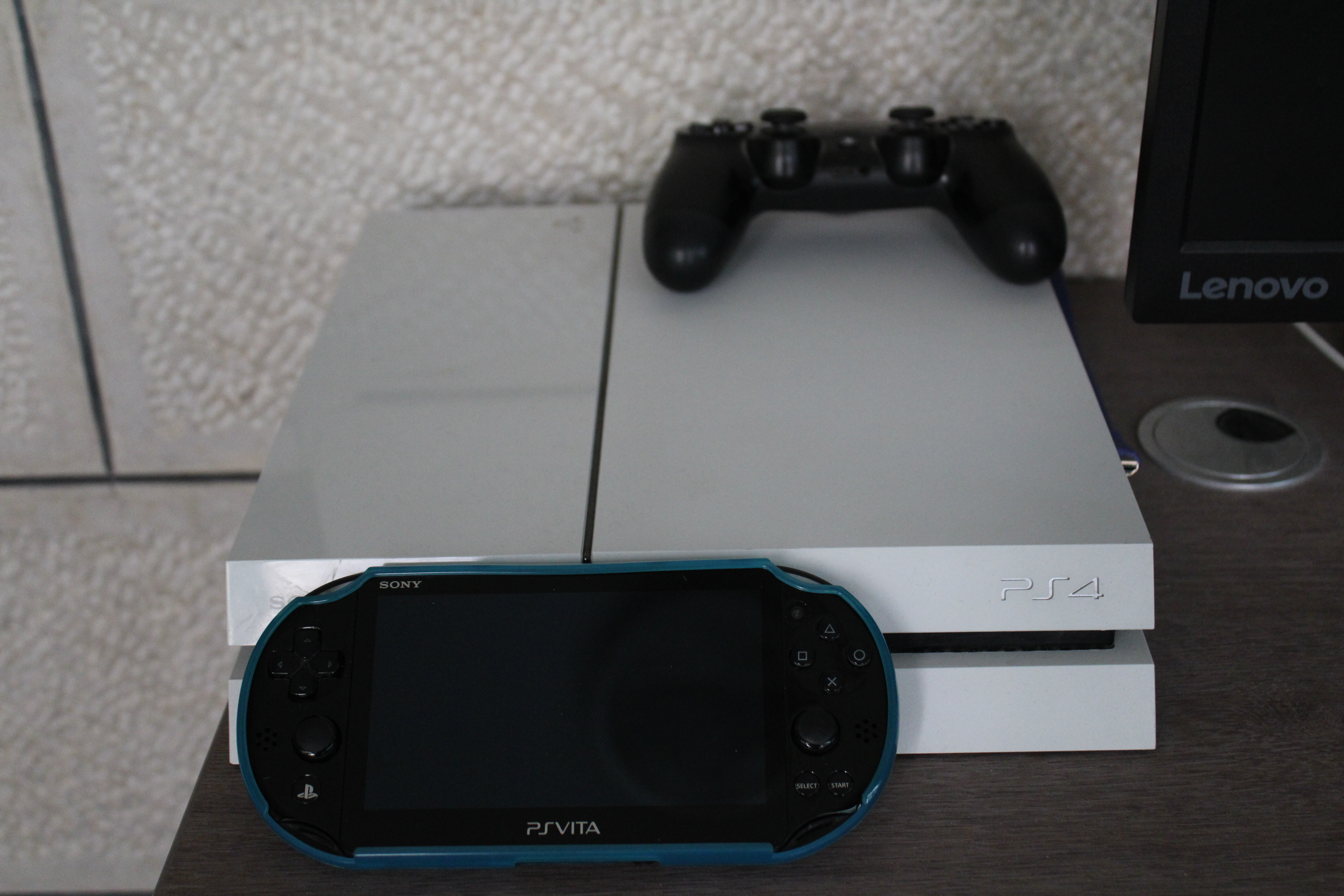 Oh gees.
I have a Sega genesis some where. 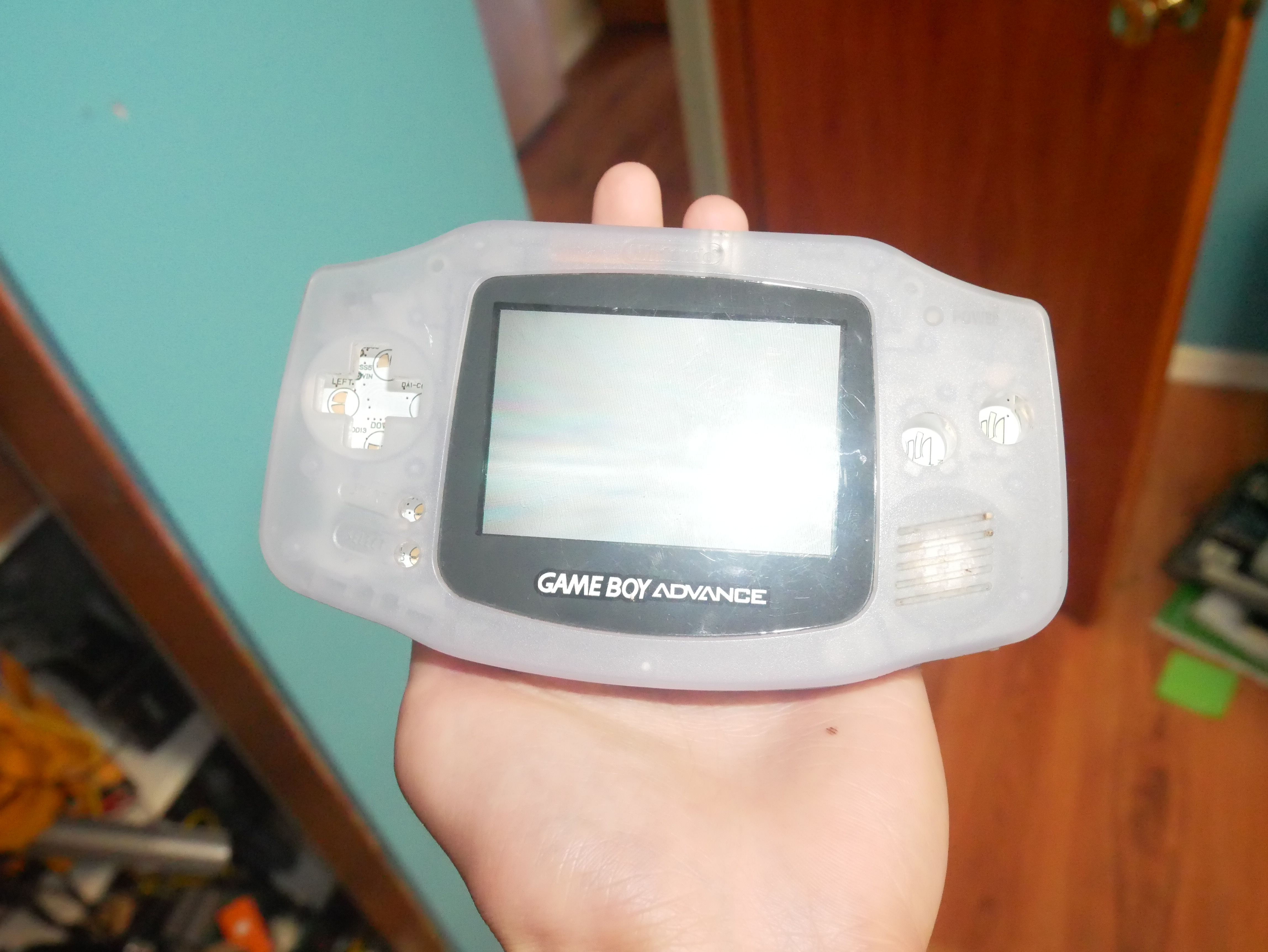 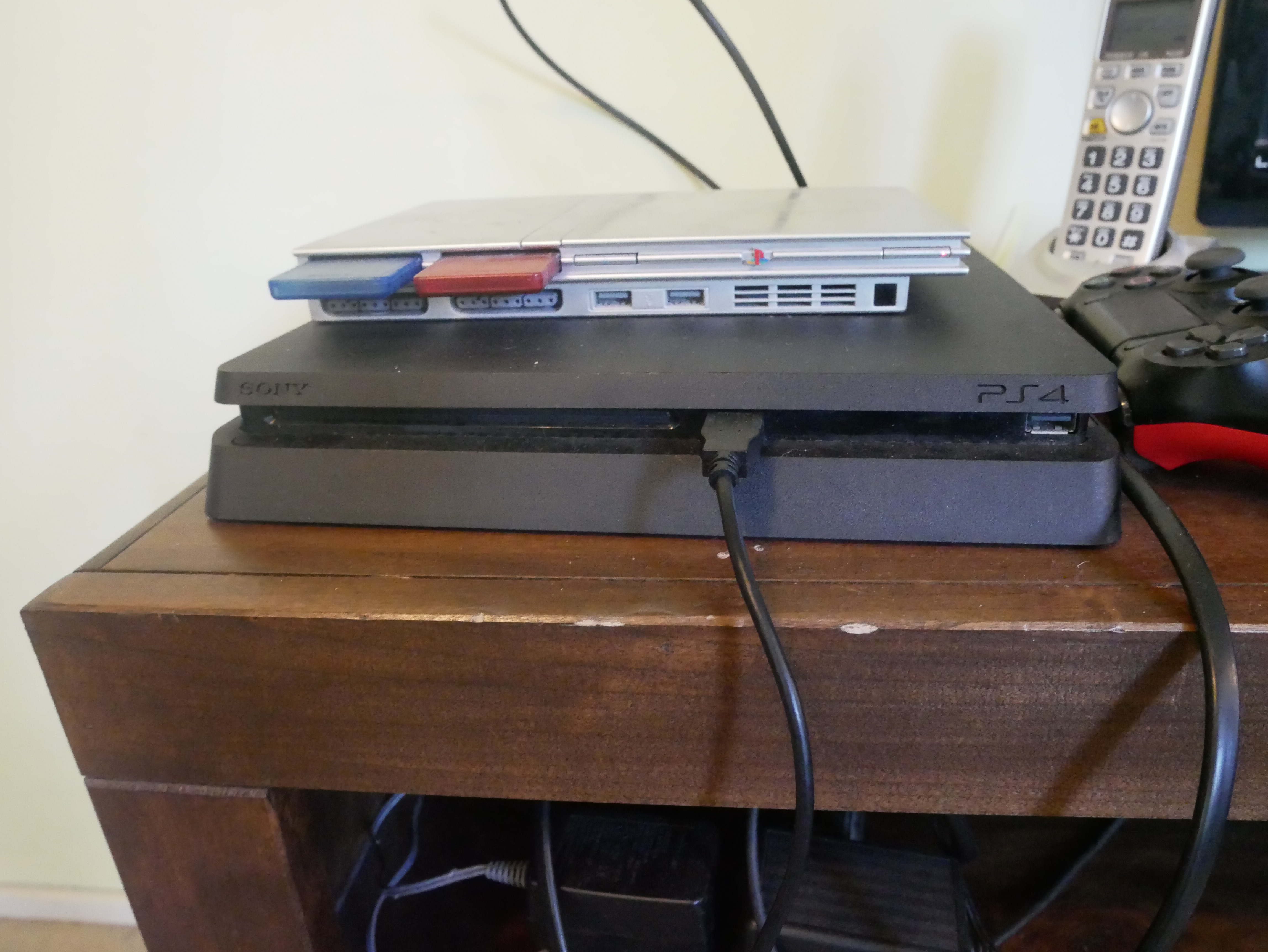 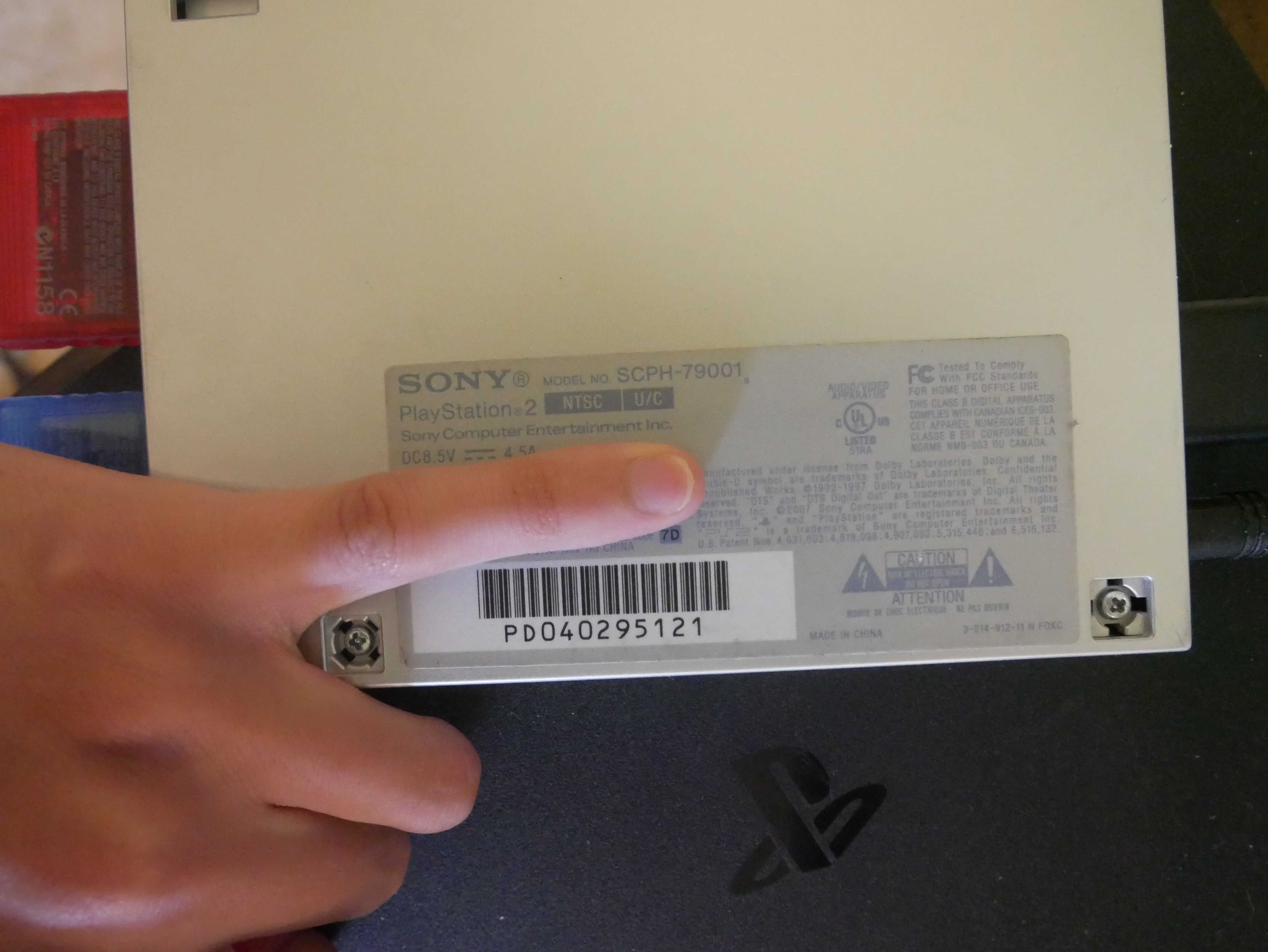 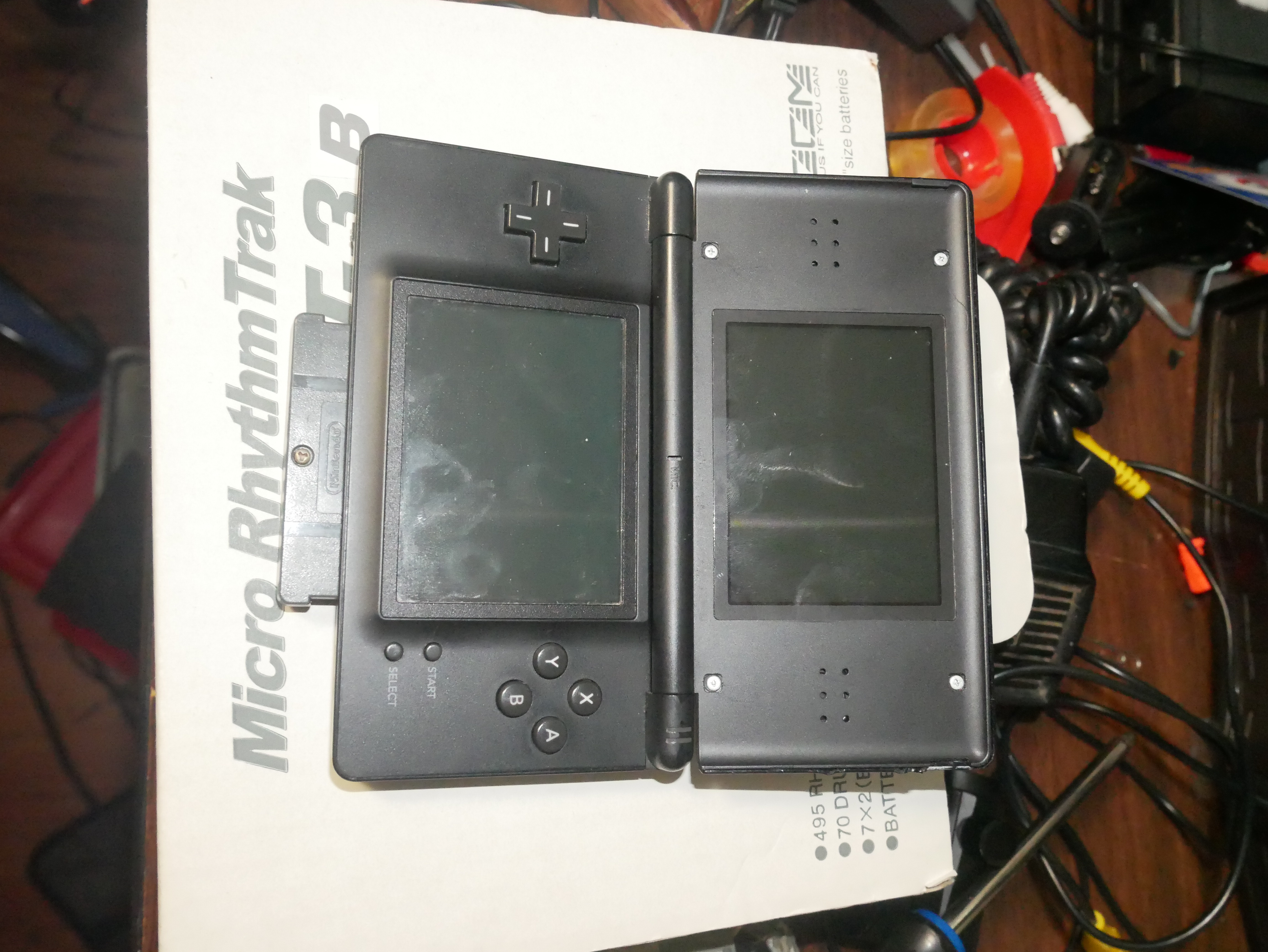 @anon92484376 do you like the original model of the GBA? I want to get one sometime, but I can’t decide whether to get the original or the SP. I like the look of the original more, but from what I’ve heard the lack of a backlight can make games hard to see.

you can get moded GBA screens that have back lite

you can get moded GBA screens that have back lite

That’s true. Provided it isn’t too expensive I might just do that when I get one

I’m aware. I’m honestly not that interested in GB/GB Color games though.

I’m aware. I’m honestly not that interested in GB/GB Color games though.

than a DS is perfect

That’s true. Provided it isn’t too expensive I might just do that when I get one The simplest solder-free solution for a backlit Game Boy Advance. Sharper and more affordable than the AGS-101, you can enjoy your favorite GBA titles with this crisp IPS LCD by Funny Playing.

This screenshot might be slightly relevant as to why I keep my PS2 hooked up.

Just got a PS3 slim.(from a friend he said it was broken but it works)
I just redid the thermal paste and rebooted it.
Also I used a PS4 controller with a micro usb and it works just fine.

Update on the Dreamcast: It shipped this morning!

It’s gonna be a long 3 days waiting for this to arrive… Provided USPS doesn’t screw something up and actually delivers it on time.

Baaaaaaaaaaaaaaaaased. I really hope I can find my way to a Dreamcast in the next few months, but I suspect more Japanese PlayStation 2 shit will find its way into my house before anything Dreamcast.

Random fun fact about the Dreamcast: it never outputs a native 640x480 signal through its analog video output, even though the console renders everything at that.
This affects VGA output from the console as it’ll be squeezing a 720x480 scaled image back to 640x480, giving you artifacts like displaying a DVD at a 4:3 aspect ratio.
I was gonna put this in a separate post but it seems that you need to wait for someone else to reply before doing so, so here you go if this tidbit of information intrigues you.

Update on the PS3, Umm I didn’t realize PS3 slim don’t except PS2 games.
The PS4 controller works but the PS3 doesn’t output though the headphone jack on the controller.
The BluRay player is beautiful, I am currently watching Big Hero 6 BluRay.

And yeah, only certain revisions of the fat PS3 can play PS2 games. The only reason I would ever get a PS3 myself is if I could find one of the backward-compatible models at a thrift store or something. I don’t really care about the PS3 exclusive games, and any cross-platform games I’d rather just get on my Xbox 360.

only certain revisions of the fat PS3 can play PS2 games. The only reason I would ever get a PS3 myself is if I could find one of the backward-compatible models at a thrift store or something. I don’t really care about the PS3 exclusive games

yeah, I was trying to get one of those but this was from a friend so…

Have fun finding any of the early fat backwards compatible PS3s. They command a ridiculous premium just because it’s a slightly rational way to play PS2 games through HDMI.
For that money I’d just go the Retrotink5x route, which is what I actually plan on doing soon.

Yeah, I honestly don’t really want a PS3 anyway. But if I ever got one it would be because I found someone who doesn’t know what they have selling a backwards compatible model for cheap. It’s not something I’m actively looking for though, as I’m aware they usually go for a premium.

I got that PS3 for free.
I might just keep it to play Blu rays.
I know I will never be able to get a fat PS3.

I still have a PS2 slim I might actually retrotink for it.
My PS2 is basically for battlefront 2 (2005), I think it’s the best battlefront hands down.